It was a strange game – no doubt in part due to the continuing controlled experiments that the Coach and I have been performing with respect to the GHBG – but beyond that it was still strange. It may seem churlish but I feel a large part of the weirdness came from the induction of a new $ Import. Giller announced early on the flurry that we would be joined by a member of the Happy Days cast whom it would appear none of the Nannas had ever heard of. A request was made for clarification but none was forthcoming… 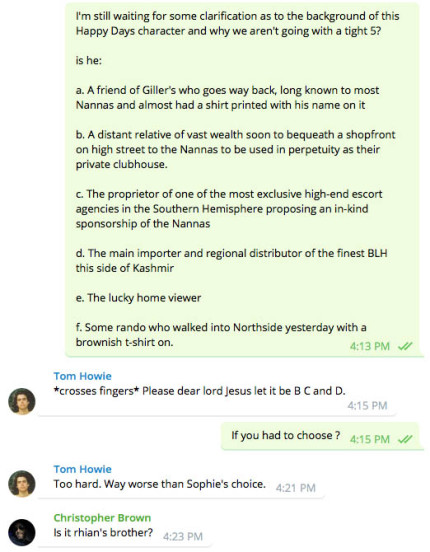 … eventually the identity of the “The Fonz” was deduced by someone with more advanced post graduate qualifications than those possessed by the Nannas – but that didn’t stop the weirdness. In fact right from the kickoff it was crazy, Giller let though a soft shot from distance that he would normally have stopped with his eyes closed using only sonic resonance imaging. Perhaps it was the startlingly novel pre-game tactics talk (or perhaps it was only startling to the bewildered test subject) or perhaps it was some kind of professional colleague performance anxiety situation, who can say. Pretty soon the Nannas were further down. It’s rather ungenerous to blame the $ Import for our defensive lapses, especially in the light of their super tight aerial skills and approach play, and I’m sure the Nannas would generally be quicker to blame the controlled experiment in these instances but on a couple of occasions the Nannas-standard-defence-mode of man marking rather came apart at the seams and we shipped another couple of super soft goals. On the upside we did also score a couple of nice ones (though I can’t recall exactly by whom at this late date). On a double thumbs upside we were joined just before halftime by ASS COACH Chasbian Chico von Martingale III shooting plasma from his chode*. On the downside we still lost.

Afterward we went to Howler and drank some superfine beers** (after being ignored by the very Dutch-like-in-aloof -service-manner-but-unDutch-in-general-compentance bar staff) but unfortunately those Nannas outside of the cone of the controlled experiment had to scurry off home inexplicably, leaving only the Coach and I to work on the furtherment of the Nanna project. Following a mandatory GHAG and supplementary beer there ensued much discussion of politics, technology and speculation of a sci-fi nature. It was also proposed by the author that the Nannas should start an Erudite Conversation Club™ wherein the Nannas partake of high quality single malt libations and discuss a mooted topic as intelligently and articulately as they can… stay tuned.