One of the great purveyors of Police Respect in history is Oates from Hall and Oates.

The Tao of Oates.

Oates is not a douchebag.

Oates is the yin, the yang and the chakra to our collective Kaballah. Oates is the private to our eyes. The no to our can do.

Oates dances the mustache dance for all of our collective Freudian nightmares and Jungian sins.

Oates rocks the retro with grace and wit. Oates rebounds on the dance floor. And within Oates’s style, his ballet, his poetry, we find the shards of ideological purity.

Oates washes our souls of sin. Oates is our ritual purge. Our mikvah bath. Our Mississippi river baptism.

Do not doubt The Tao of Oates. For Oates is not just the key to spiritual enlightenment due to his second-banana 1980s rock star iconic forgottenness. With a fantastic ‘stache. Oates is the “other” by which we define ourselves. The projection of the schism within all of our psyches.

Oates is the unknowable. The ethereal. The corporeal embodiment of our deepest darkest fears onto that which we normally fail to comprehend. That which we deny to ourselves.

Oates fractures our false construct. All through the power of one single, iconic, 1980s moustache. For Oates is not Hall. Oates is Oates.

Oates exists not as fixed polarity, but as conceptual dialectic. Oates is neither background musician, nor foreground solo artist. He is neither star nor chorus.

Oates is between the stage and the audience. The light and the dark.

Oates challenges the entire paradigm of binary either/ors that we use to construct narratives to define ourselves and our world.

A false construction that needs Oates to reveal its falsity. That needs that ‘stache to reveal the higher truth.

The Oates in the Machine.

No, Oates is most certainly not a douchebag.

For Oates is us.

Sometimes the schoolchildren write to me and they say: ‘The Nannas are obviously a bunch of well turned out blokes, who have the best strip in the competition, right from the artistically designed and metaphorically loaded top down to the scientifically advanced sweat emulsifying socks, and they wear it with pride because they know that to be dressed as a team is to play as a team, but what do the Nannas wear when they are not in carving shit up on the soccer field?’ I will tell you what we wear. We wear our off field uniform. See:

Yes, even the shorts are the same, and they both wear brown y-fronts with gold trim specially produced for us by Jockey. Only the captain is allowed to vary in this off field uniform by way of wearing a blue striped bed cover over his head (see background). I hope this answers the children’s questions. BTW Chas, I have worked it out. If pus comes out it’s a pimple, if Claire won’t kiss you it is a coldsore.

Sometimes schoolchildren write to me and they say: ‘The nannas are obviously a bunch of superfit guys who can play soccer really well, but what do they get up to when they aren’t carving shit up on the soccer field?”
I will tell you what we do. We dance. See: 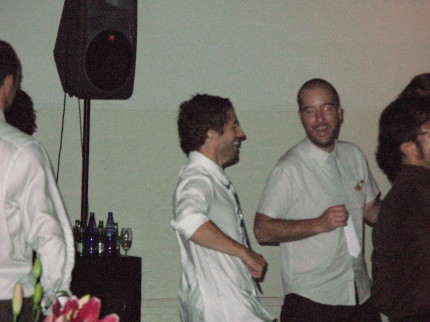 But sometimes just dancing isn’t enough. You have to take your pants off and dance. Like this: 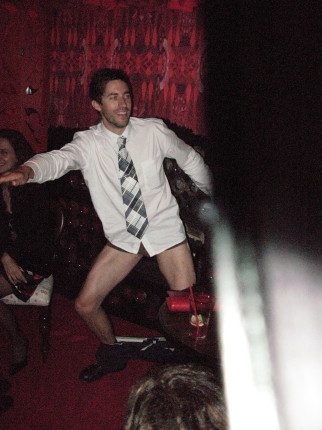 I hope this answers the questions of the little children.