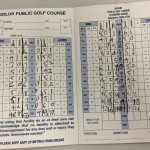 Venue
Keilor Public Golf Course. The course is okay, but probably below what the Nannas usually expect from their golfing facilities, being very flat, very straight and the greens not quite up to snuff. It looks to be in the middle of a major overhaul as three quarters of the holes have been upgraded, with bunkers lining fairways and a lot of landscaping being completed, however, the run from 7 to 9 feels very much like playing in Junee.

Handicaps
Gilla and Jim played off scratch, and Rhian got nine shots. The handicapper got it pretty much spot on for Gilla and Jim, however there is still a question mark over what Rhian should be playing off. He was given shots on half the holes on account that he had previously beaten Gilla (no mean feat), however, he probably should sit somewhere around 12 to 14.

Front nine
After the first couple of holes, which were a bit of a mixed bag for all involved, Jim quietly started to establish a slim lead. He hit the green in two on the par 5 third then got nearest the pin on the par 3 6th, with a majestic pitching wedge, and was generally playing solid, getting off the tee nicely and hitting the ball straight if not particularly sweetly with his irons. The one area he wasn’t particularly doing so well at, though, was with his flat stick. He couldn’t buy a putt.
Gilla was hot on his heals. After his abject failure at the 6th, he started to come at Jim, matching him off the tea and generally going stroke for stroke with Jim until the nine, the first hole he won. Gilla’s driver was key, and his chipping, when he missed green, was really making Jim work hard. It seemed like he was settling into groove and was going to streak away from the field.
Rhian meanwhile, was struggling. He repeatedly sliced his driver, which often left him in the tea trees and nothing to work with for his all important approaches. The one thing that Rhian did have going for him was his putting. Mid way through the front nine, he found his range and started banging them in from all over the place.

Back nine
After Gilla’s run culminating in him winning the 9th his back nine got off to a bad start. On the par 5 10th, his tee shot went straight left, not making twenty metres and not getting passed the women’s tea (he owes us all a round), and then he started playing army golf (left, right; left, right). From there he did still play some good golf but was always behind and trying to make it up. It was his work off the tee that was hurting him. The par 3 13th was a classic example. His tee shot he duffed, barely hitting it 30 metres, but stepping up to his second shot, he put it on the dance floor and then holed out for a par.
Rhian, on the other hand, started to pick up. His swing found a bit more rhythm and his putting remained a factor. Mid way the back nine, it looked like he would overtake Gilla, only for him to bomb out on the last three holes. Again his driver let him down, finding the trees right, just when it looked like Gilla was in trouble.
Jim meanwhile, was in the groove. He messed up the par 3 11th, hitting his seven over the green but apart from that he played solid par/bogey golf. He bought a new three wood over Christmas, and coming into the last four to five holes it really started to pay off. He didn’t hit fairway every time but he put the ball way down the fairway, and most times gave himself a short iron to the green. It has to be said if he had been putting better, he would have shot a much lower score, but the greens were a bit of mystery to him.

In the finish
In the finish it was a pretty good day. Apparently the Nannas will be heading out on a monthly basis to do battle again, so we will probably have to look into some better courses. Yarra Bend will come into it (even though this correspondent thinks it’s a bit over-rated, especially after its last facelift), Gisborne will be an option too (if Gilla can get over his nightmares from his last visit there), and Trentham could also be an option (even if it does give Jim a significant advantage).

8pm, dinner at the Waiters Club

Midnight, poker, venue yet to be decided on (although all suggestions will be investigated for their suitability by upper management)

One option is Prudence, however we have to finish by 1:30 am

Kondo is also offering his house in Richmond as another venue