The mercury has really dropped recently, which makes the dedication of the Coach® and the author to their on-going controlled experiment even more remarkable. I swear the temperature in the Merri Creek Valley was close to zero as our intrepid cyclists made their way to Brunswick (perversely riding within meters of the skippers house en route).

Much like last week kick off was again meet almost immediately with weirdness. This time in the form of Joel – aka Little Ref – informing our opposition that they were on the wrong court… that was a first. They departed and the Nannas, who until that point had been playing rather well, were left standing around the court looking rather confused (the author even more confused due to the bewildering effects of the controlled experiment was prompted to question if in fact it was actually happening in actual reality). Eventually another team was found who appeared half familiar but at the same time kind of cobbled together. Weird. Needless to say we’d really had our flow fucked with. Now, we’ve played these guys (or most of them) many times before and one thing that is really noticeable is that they really don’t like to smile much, if at all. Anyway, it was a curious game in that we actually played quite well, stringing together some really nice moves, especially passing around the back (with some tasteful touches from Takeshi in goal), but we lost really badly, shipping 9 goals in the process ? how the hell did that happen. I was clearly to blame for one of them, I swear there was no way the guy could control this crazy goalie looping punt… but he did. The Coach was also to blame for a couple of not-following-your-man-as-he-runs-in-a-little-circle-doing-a-1-2-in-the-box-before-shooting goals. So perhaps the Skipper is right in proposing that the GHBG is good for attack and not so good for defence… could be something in that… maybe… possibly. Speaking of attack, we did score a couple of nice ones, I almost karate kicked their goalie in the face to get a mega cross court switch ball from von Martinadale III. There were also an inordinate amount of goal-mouth scuffles which we never quite able to convert. I should also mention that there was some rather unsavoury off-the-ball action when one of the opposition blatantly elbowed the author in the ribs ? apparently this was in retaliation for some perceived injustice earlier in the game. Moments later the same perpetrator, having been bested in a 50/50 ball proceeded to hack wildly at the authors legs as he made off with the ball, fortunately for the authors bodily well being he had transitioned into a kind of flux state where the hacker had become more a tricky piece of terrain to navigate while skiing or mountain biking than a human, a kind of terramophism if you will, which the author successfully avoided whilst involuntarily emitting a whoop of glee…

Anyway, the score did most certainly not reflect the game. poohs.

Afterward we went to Mr Wilkins and were regaled with tales of a young von Martindale III’s late night adventures in prophylactic procurement before being joined by Gillman du Brassy for an entirely wholesome game of Jenga (which the Coach lost). Pints of Steam Ale (and some unmentionable lager) were consumed and talk turned to the backdated bucks party that Jim would be needing having gone and got hitched in the Big Apple whilst on a research Junket for Cory Bernadi’s new conservative party for whom he will be shortly announcing his appointment as press secretary. The Nannas then spent the rest of the evening thinking of words that rhyme with Cory… story, allegory, Montessori… 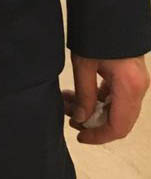