Well here’s a surprise.
Captain takes the triple crown, I’d like to thank my family…
Wong and Brown not far behind 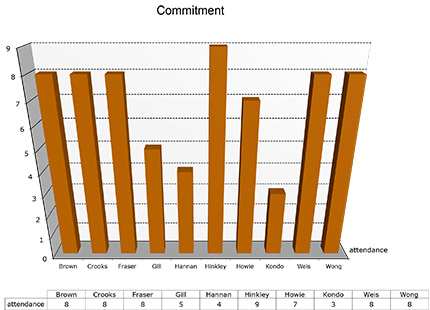 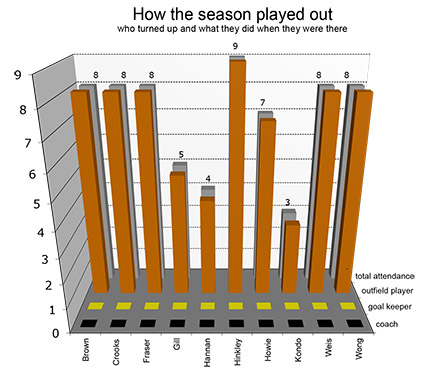 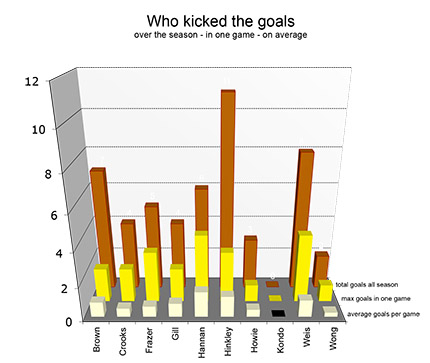 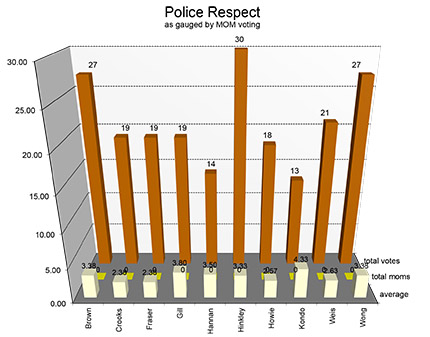 Wow – This is tight.
Chris Gill storms home with a 13 vote final game to tie it up.
Big wraps to Taoser for the  almost triple crown. 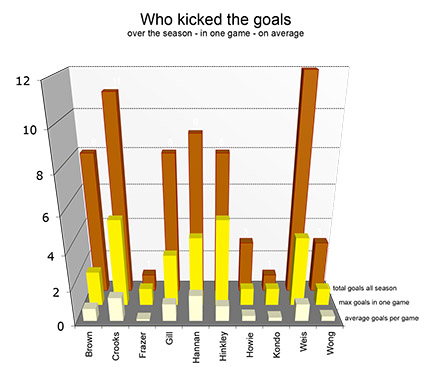 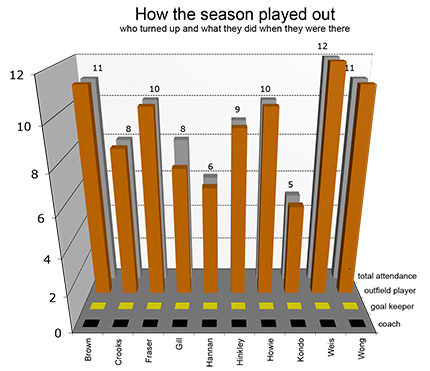 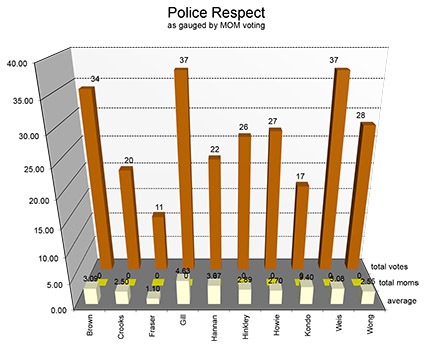 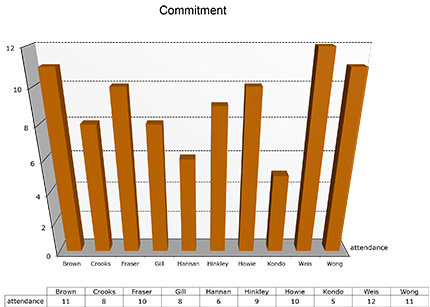 1. A quick breakdown of the match

First five minutes
We started strong: Chassy got the first for the match, slotting a right footer from a delicate angle. We seemed like we were going to get on top.

Next ten minutes
They scored four. They hit us repeatedly with some very well taken half chances that even Gilla had trouble getting his hands on.

The goals resulted from a Nanna not marking close enough, a Nanna being a bit too slow to get to their man in front of goal, or the ball dropping luckily for them and a Nanna unable to respond quickly enough.

First ten minutes of the second half
The Nannas got back in it. We held firm at the back and got a couple to bring it back to 4-3. The first was a bit lucky. From a side kick in Chassy whacked it toward me in goal and I got a touch as it went in to the back of the net; the second was similar but this time Chassy slammed it home after I tried a back heal to no effect and a goal mouth scramble.

2. Analysis of our current slump

Are we suffering the classic post glory hangover?
Possibly. We did play very well in the finals series late last year and it was always going to be hard to maintain that sort of standard week in week out. What’s more a lot of Nannas, if my festive season was anything to go by, overindulged over Christmas a lot more than they should have.

Is it the unsettled lineup?
The early new year always poses problems for the Nannas. Cocky and Chas like to get a bit camp. Andy likes to cultivate a beard. Guy and Jim are solely focused on Orientation. And Tao has been in and out (of the team) more than a teenager on his first visit to a brothel. It doesn’t help.

Do we kick it away too much?
We did last week, and one game earlier in the season when Gilla went on of a bit of a I’m-going-to-pepper-the-back-wall-above-the-opposition’s-goal rampage. But for the most part and especially last night we have been getting a lot better in our general play.

Do we need to train?
It would help but this is very unrealistic. As any Nanna knows organising anything Brown always comes with the possibility of death by a thousand emails.

Is it all about Chassy’s injuries?
It has been said that we cannot win without the Chasm. While the fool that said this needs a good slap over around head, it is true Chas does bring a lot to our team. However, we have won without Chassy before and as shown last week Chassy shouldn’t play if his groin muscle is inflamed from over use.

Does Cocky need to score more goals?
Yes and no. Yes because he hasn’t been hitting the back of the net that much lately and when he’s on form his goals usually come in batches. No because there are other Nanna goalscorers, namely Tao and Chassy, who regularly get on the scoresheet. And, with the Captain, Coach, Gill and Jim chipping in from time to time, we usually get enough.

Were the Nannas holding their collective breath at the impending birth of the coach’s first?
Maybe. Hard to say. Coach seemed pretty relaxed about it all, although he did want a piece of that little nancy-boy punk, who whinges and cries every time someone even looks sideways at him. I guess we will see this week if the birth of a new Nanna will inspire us to new heights.

Do we need to play positions?
Definitely. In attack Jim, Coach and Chas need to start at the back and push forward. Cocky, Tao and Captain need to start in midfield pushing forward. Guy and Kondo need to start deep forward and then push back toward our own goal.

In defence, we just to mark the fuck up and stay the fuck with our man.

Are we getting too old?
Never. The Nannas will never be too old.

Is it all Ghee’s fault?
Secretly in everyone’s heart of hearts we all know everything’s Ghee fault. What’s more, it makes perfect sense to blame him for everything. It just does.

After much unresolved discussion regarding the substitution policy of a “loose 8” the Nannas were left high and dry by whoever the fvck they were meant to be playing. No matter, the Nannas would fight it out amongst themselves. in The Brown corner under Captain Kondo (Woohoo! very great to have Takeshi back in the nanna fold) were DC, RG & AW, in the golden corner guided by Captain Gill were CB,TW & TH. Four aside means one thing, running. Nannas A started brightly and were looking good but The Golden Nannas started slicing us up and were soon well in front. In the second half the tables turned and Nannas A pulled it back ( a notable Hleb-esque strike from RH). It was neck and neck (though the golden nannas were in reciept of an own goal) when TW was heard to yelp before crumpling to the ground. Down to 3 men the Golden Nannas put up a valiant fight (whilst Nannas A seemed to go into slow mo) but it wasn’t enough, AW sliding home the nutmeg* winner in the dying minute…

but back to the subbing, dual goalie controversy. Le Coq Numerique has gone part way to solving the problem.

…but wait there’s more. At the pub after the game The Nannas were treated to a sneak preview of the wonders of the CHDK firmware hack . Which is of special interest to the G7 owners in the crowd. Kudos to Guy “reach around” Fraser for wording up the author…