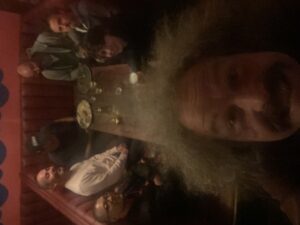 The Nannas turned up early. I think we have to stop this stretching beforehand. It’s got ruinous results.

the last two weeks the Nannas have stretched out some soft tissue concerns. This week it would appear no different. The goalie limped into his Friday.

The game was signaling poorly early…. the opposition was fast, and clinical. Let’s just say at 1-4 at half time we knew we had a fight on our hands.

The youngest Nanna, this evening, Elliot signaled his intentions very early with a yellow for pure brown aggression within 5 minutes.  It set a precedent early. We played hard but slightly slowly. They moved around us and towards their goal.

ultimately the goalie picked up the ball 9 times from his net but it seems his fellow police respecters admired his pick up styles. The end of game happened and everyone looked at each other as the final whistle blew and gave each other “I wish Jim was here” eyes.

not so much for his on field brilliance but maybe more for his after game care. He was the king of helping chassy dry off after his shower. The boss of loosening toms hamstrings on the side of the court. And of course the lord of the back pat on the walk out of the stadium.

it seems the Nannas will need a bi weekly hand to be put up to give some post match cuddles. Some embryonic hugs, or some supple manipulations, anyone? Andy?

the country sweetness of Jim is sorely missed. We wait for next week excitedly and maybe just maybe we will win. Not this week though. Not this week.

thenpost match we classy, another look at the Retreat and the highlight was Cocky ordering the SpatchCOCK. That’s a lot of cock on a table. Maybe it was a seven at the end.

I left early, it will live in the world of maybe.